skip to main | skip to sidebar

Monsters of the Deep

Hey Chad, so you were standing in front of a giant squid this week??
Well this one's for you! Actually, if it wasn't for the limitations of the 4th dimension, we might have both been looking at a squid that day... oh well.

Anyhow, the Canadian Museum of Nature in Ottawa, Ontario, has a pretty swell exhibit on the oceans of the world. And what would that exhibit be without some portion of a giant squid somewhere? Not quite as exciting, that's what. There was pretty gnarly arm and an intact beak (as intact as it could be without being attached to the rest of the squid, that is... maybe they pulled it out of a whale's belly?) 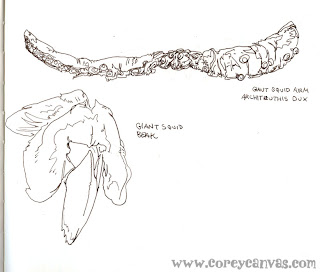 Then there was a pretty cool model of the biggest creatures (THAT WE KNOW OF!!) that live in the ocean... A whale shark, a colossal squid (not to be confused with a giant squid), and a blue whale. And of course a little person for scale, but a mermaid would have been equally effective.
I thought it was really cool. 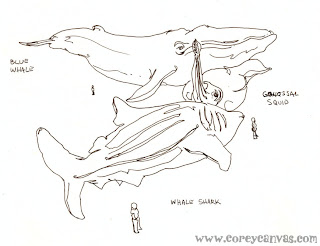 Did you ever stop to consider how different Cryptozoology would be in the world of Pokemon?

Well I can tell you it would be a MUCH different profession... For one thing, it would probably be considered a credible scientific vocation. (no offense, but seriously...)

Think about it, they're discovering new Pokemon all the time! You can't go two years without some stupid kid catching a so-called Legendary Pokemon.
"Legend? Pffft--Are you kidding? Jimmy down the street caught one last week... taught it to surf, too." 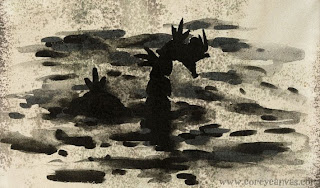 Oh sure there'd still be TONS of speculation... like the old catch-and-release trick, if you know what I mean. "Yeah I caught me one. An 'e waz 30 foot tall if 'e waz an inch! But I let 'im go, I did."
Sure thing, Grampa. 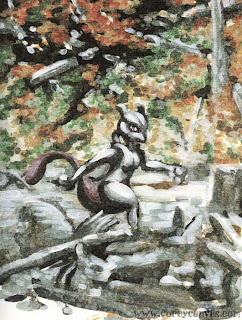 I'll let your imagination do the rest of the talking, but just keep in mind how cool it would be to be able to go on a Bigfoot expedition, catch him, train him, and then enter him in a beauty contest.

I thought I would post one more since I had it done. Back in my college days I used to paint a lot on plaster cause you can get some wild results that you can't do with paper.
Posted by Chad C. at 1:23 PM 1 comment:

I heard the title of the post from bigfoot tracker, Tom B. who was at the heart of the summer of 08 bigfoot scandal. Broke my heart...but here's a dead bigfoot in a freezer.
Posted by Chad C. at 11:42 AM 1 comment:

Cryptozoology in our homes

If Cryptozoology is the study of creatures that may or may not exist, I offer this; a hypothetical drawing of the squirrel OR SQUIRRELS living in my attic.

Let's start with the facts. I know they're up there... and I just KNOW they're going through all my stuff, playing with my old toys, wearing my old t-shirts, wearing out our Christmas lights and making one hell of a lot of noise.

And I KNOW they're red squirrels, too! I've chased them in the backyard. Little bastards... 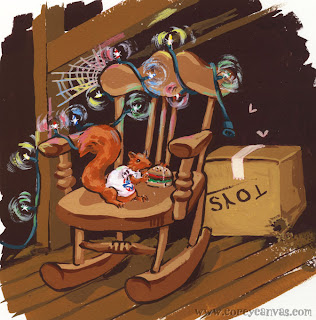 Hey there Ladies and Gents (and anything else), welcome to DAY 1 of the brand new FLATLANDERS BBQ... Dinosaurs, Cryptozoology, Drawerings... my god, we have it all.
Why not start by introduces the key players? Here's a nearly photographic account of Chad Covino and myself, Corey Waurechen, on a recent Dinosaur hunt. 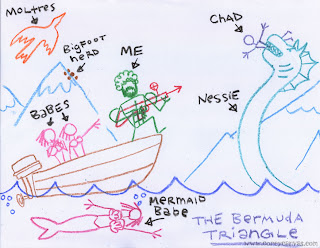 More BBQ'ers and more BBQ's coming soon! Like, faster than a deinonychus on Thursday. 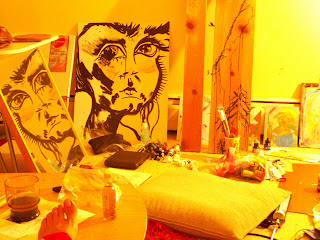 My intention is to do a self portrait - hopefully this weekend if i can get organized - but before I do I wanted to post this. There's a lot happening in this photos but i've yet to take a picture of the portrait on it's own. That was Rizzo and my apt in van, that was the art wall, which always had masonite and canvas and MDF lined along it and art supplies spewing from dense right near to wall to a shoreline of walkable floor a few feet away.

I did this portrait in maybe 10 or 15 minutes. It felt reallllly good. I had a good but weird and unexpected day. Came home, took the mirror off Rizzos wall and sat and did it. It's the big ugly childlike face. I don't know how much it 'looks' like me technically, but it works. I'd say it's one of my fav self portraits. The morning i had to fly back home Rizzo and I had to score it, then snap it in half to fit it in my suitcase, which was symbolic i think of having to come home.

Anyways, finally I have something to post! More soon hopefully.